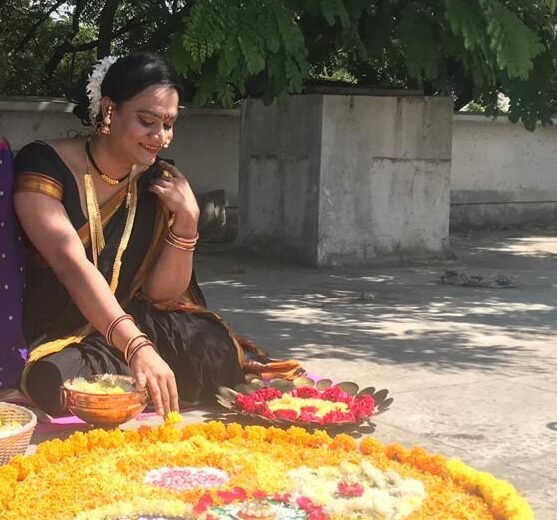 It is not easy to grow up in a world that treats truth in binary terms – you are either good or bad, beautiful or ugly, smart or dumb, a woman or a man. Sonali was born to a middle-class family in Pune and upon birth, tagged as a boy in the biological sense. She, however, comments on how she has always felt like a woman – with respect to both, the mind and soul. She has always, for as long as she can remember, seeing herself as a woman. When asked when exactly she came out to herself she exclaims, “I was born feminine, and is it my fault that I was born feminine? This is the way nature has created me”.

Sonali always knew, and the belief got reaffirmed over the years. She was only six when her teacher gave her the opportunity to express herself as a girl through the medium of dance.

Sonali’s coming out to her parents or to the society never happened formally. It was always obvious – to Sonali and to everyone around her. Being born a boy and identifying as a girl came with its own set of trials and tribulations. Her childhood was full of people treating her like an outcast. Given the prospects of transgenders in our country, it is no surprise that her parents got worried about how society would treat their (then) son. Many would go up to Sonali’s parents and ask them to “fix” their son unless they wanted her to be out on the streets begging. When she was in fourth grade, her father took her to see the doctor. She was shown photographs of naked women. This was not done so as to gage her affiliation to the female body, but as a way to understand her level of arousal. The question was not about whether she identified as a boy or a girl – but whether she was attracted to women. Sonali’s parents were desperately trying to find a cure to whatever this ailment was. And pray to tell, what medicine was she given? A beating three times a day. She has also been prescribed Viagra from the age of eight. The treatment went on for over a year but to no avail, unless you count regular bleedings as a result of the medication as progress. Looking back on the horrendous experiences, Sonali says that she is just grateful she was not given shock therapy. Which is, too, a common practice today.

When nothing worked, her parents took her to the tantric community. Many tried to molest her here. This was the first in the string of many of follow.

One must keep in mind that there was no access to the internet at that time. So the stigma that society perpetuates has a nasty sting that is harder to escape than in a scenario where information is available. Sonali believes that was lucky in the sense of finding a support system early on in life. Looking back she clearly remembers this one time when, upon taking note of something different about her, her teacher told her, “You are normal, it is the world that is abnormal”. Sonali also found support in her new mother. After her mother’s passing, her father married again and Sonali’s stepmother was anything but the character from Cinderella. She was kind, accepting and encouraged Sonali to unashamedly be herself.  It was also during this time that one of her school friends, a teenage boy who identified as gay himself, introduced Sonali to the local LGBTQ community. It was here that she learned that it was okay to be the difference and to embrace our differences. 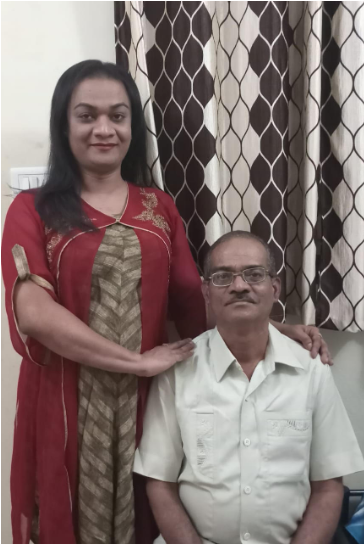 Sonali with her father

She then got in touch with the trans community at the Red Light area, and as the fascination grew, she formally joined the community. Sonali mentions something called the “guru-chela parampara” which is a staple in the trans community here in India. The concept is such: the guru or teacher becomes your mother and you, the chela or student, is fully accepted as their child. With a new family that fully understood Sonali, she finally felt at peace with herself and at home with the world.

The formal transformation via the SRS surgery took place a few years later, which completed Sonali’s biological transformation as a woman. The question of whether or not to get the surgery didn’t even enter Sonali’s mind – it was always a question of when as opposed to if.  As of today, Sonali works at a trans-rights NGO and is an activist in Pune. She has a strong bond with her father and step-mother and they have come to not only accept their daughter but be undoubtedly proud of her.